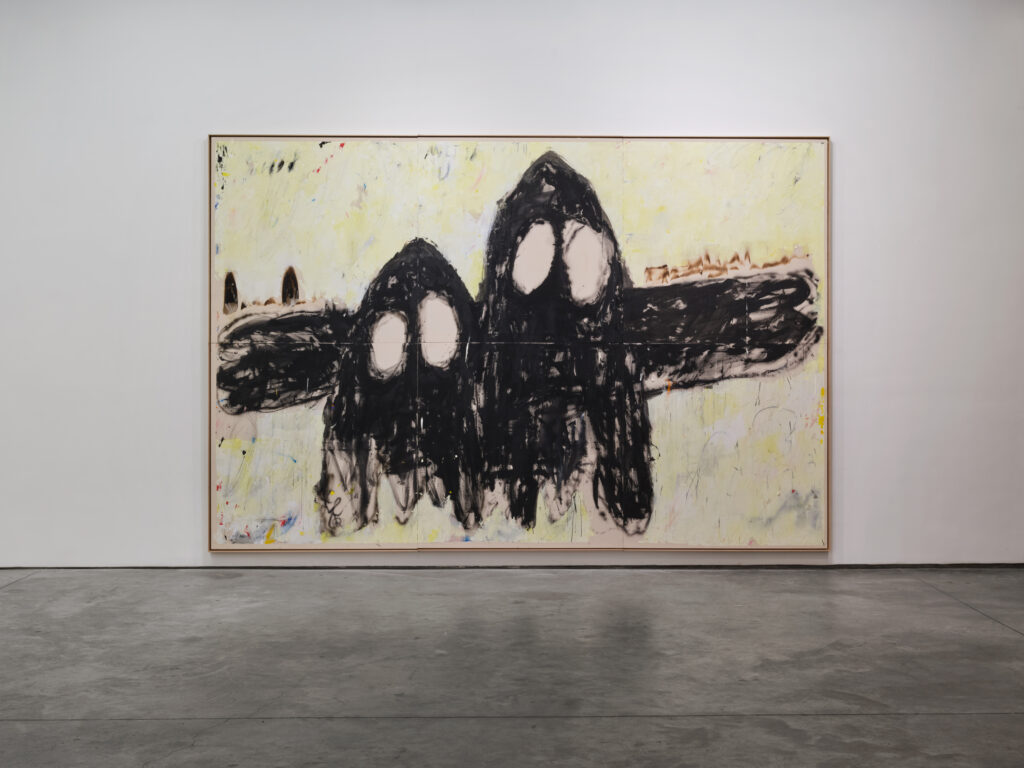 The enfant terrible of the Spanish art world makes her NYC debut with a solo show presented by LA BIBI Gallery.

Marria Pratts’ paintings sing like thunderstorms — in raging, obsessive gestures and electrifying cracks of pink and yellow, her canvases all possess a kind of mysterious alchemy and hellish beauty born from a maelstrom of emotions and memories in Barcelona. They are variously menacing, endearing, or emotive, or perplexingly, all three at once, and break with the masculinist traditions of Surrealism and Expressionism.

Although, as Pratts says of her own work, she does not engage in critic-pandering conceptualism or decorative image-making, rather her paintings are epiphanic explosions of oil, spray, and neon, something consumed and released like an acid trip and experienced altogether as a passageway or portal.

Her gallery on the island of Mallorca, the roving LA BIBI Gallery run by Marc Bibiloni, is currently presenting Pratts’ first solo show in New York offering 10 medium to large-scale paintings embellished with bolts of neon tubing threaded through tortured surfaces. Some of these action-based works have been attacked with oil sticks and others were set aflame. Melted with U — hosted at the ELM Foundation’s art space The Boiler in Williamsburg, a suitably cavernous former warehouse — plays with ideas of street art graffiti and the white-box gallery, while challenging generally-received notions of both. Several of these pieces stretch several meters. Ghosts, clocks, neon signs and burnt canvas reappear and become immersive, nearly architectural, constituents in a spatial reformation of the gallery space. The result is an impressive, almost chapel-like, temple for light. 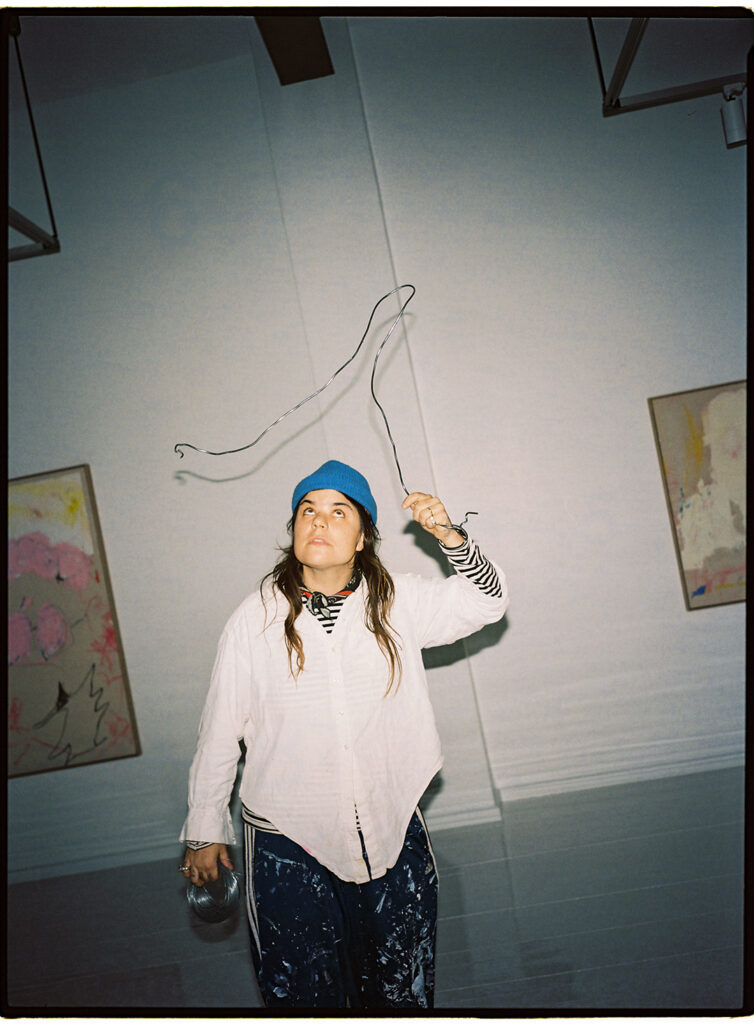 One diptych, Double Face Up Side Down (2022), brings her recognizable iconography together; two anxious, inverted smileys suggest something sinister, and then maybe an emoticon or cartoon frame. A barb of neon jutting from the upper quadrant of the painting mirrors the brooding double smile, but also a spiral of razor wire security fencing. Pratts’ works occupy this space between darkness and light, weight and levity, in a contemplative study of urban indulgence and its vast underbelly.

Born in Barcelona, and now living in the dense community of L’Hospitalet de Llobregat on its outskirts, Pratts embraces the fringes of art and society. She is a veritable connoisseur of the industrial area surrounding her warehouse studio and collects inspiration among the things refused or left unappreciated by society, whether they be flowers growing out of the concrete, stainless steel chains found in the street, or the local market-stall owner with a past. The warehouse that she occupies has a haphazard, anti-establishment ethos at its core. Her “bedroom” is built from cardboard found around town.

Part flâneur, part enfant terrible, Pratts leavens her paintings with these localized vignettes and reflections on decay or decadence and devastation. And she has already received museum recognition on the European circuit, with major exhibitions at the Museu d’Art Contemporani (MACBA) in 2021 and the Fundació Joan Miró this year. Her first show in New York sees lightning strike more than once, and we were eager to catch up with the artist and her gallerist to discuss.

Alex Droesch — (AD) The way you pull apart the idea of painting at its seams is intriguing. Your works often draw attention to the picture-plane by emblazoning it with neon or burning a hole through it. When did you first start playing with fire?

Marria Pratts (MP) — It is like asking me when I started to smoke (which I do not). Burning is something ancestral to human beings. If we think specifically about what concerns to painting, I love the risk of burning what I have painted, I think it is beautiful. When you paint, it is because you want to feel alive. 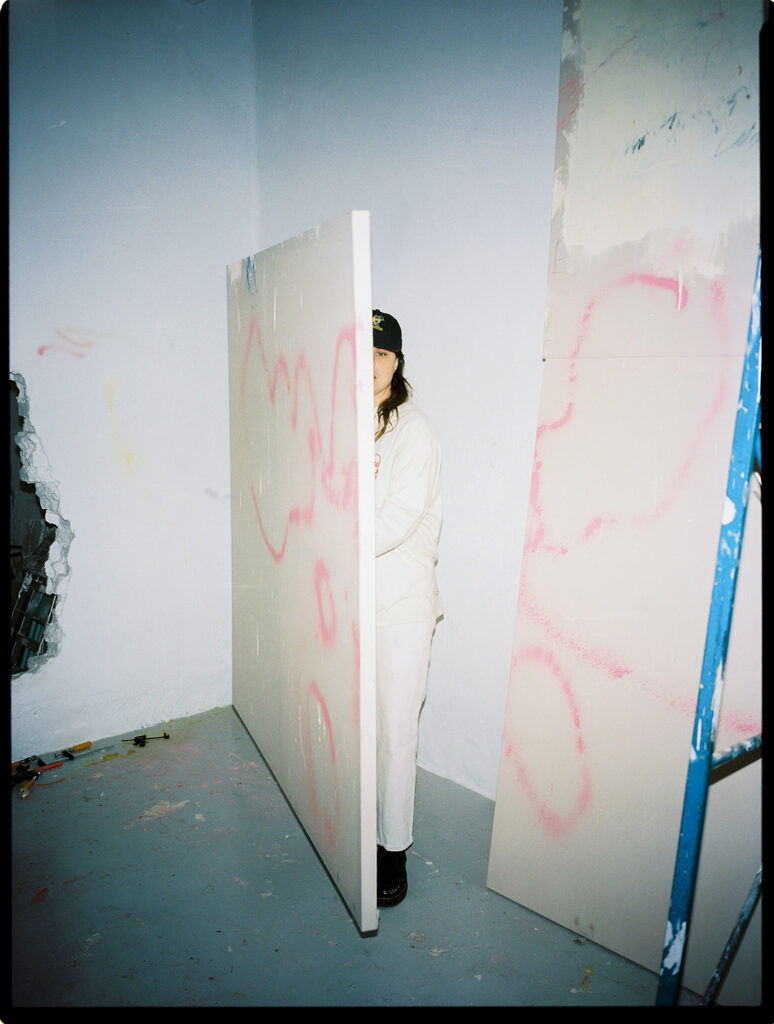 (AD) — You said in previous interviews that the surrounding area of your studio, in L’Hospitalet de Llobregat, might have an unconscious influence on your work, and your paintings on view in Williamsburg at Elm Foundation’s art space The Boiler all seem to carry a specific aura or emotional charge. Would you describe your practice as representational in that way, since your paintings might exist as records for experiences and places? Or is the city more like a tool, something to draw on for materials and inspiration?

(MP) — I would say that painting is something you can’t control. Body and brain is a trash can that collects all those walks near the spaces where you work. Deep inside, cities are no places and they evoke exactly the same feeling; nostalgia, rotten, absolute beauty and decay.

(AD) — Your gallery is headquartered in Mallorca, but has staged exhibitions all over Europe (Madrid, Paris, Venice, London) that respond to the artist and their work. What made you think of New York for Marria Pratts?

Marc Bibiloni (MB) — Marria Pratts gets her inspiration from her walks in the industrial areas, where she seeks out the traces of beauty amid the decay. Her work can be read as a defiance of our social structures, the contradictions that permeate the city, and the challenges of living in places under the constant threat of gentrification. We could feel all of that in Brooklyn. Then we found the perfect place for the exhibition; an industrial warehouse in the heart of Williamsburg called The Boiler, which generates a perfect dialogue with Pratts’s work; brick walls, old machinery, fire marks on the walls… a space that shows the beauty of the decadent, full of secrets and stories of the big city life. Subjects of inspiration for Marria Pratts.

On the other hand, Marria has become one of the most demanded and recognised artists in Spain and Europe and she has received institutional recognition. New York has always been the capital of the art world worldwide and bringing her work to New York was not only a dream but a natural step for an artist that is experiencing such growth. 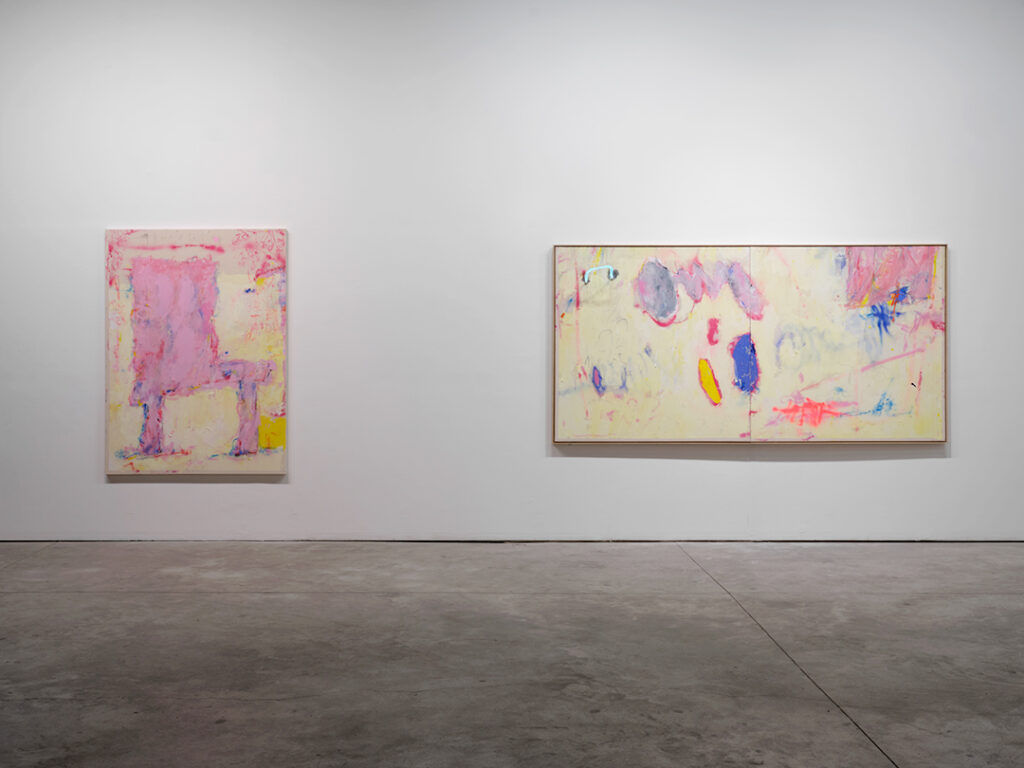 (AD) — Melted with U feel both explosive and immersive. How do light and certain colors reappear in your work?

(MP) — As a painter, my goal is to send a signal and this one is always through colors and layers. It is my own language, which I can not decide, it is an intuition and a learning process. Every time a new color appears it is a discovery.

(AD) — Marc, Marria’s work often feels so localized in the sense that each piece feels like a response to an experience, or that it was activated from something in life. How do you look at this sort of obsessive accumulation on the canvas?

(MB) — Her studio process can be defined as intuitive, wild and contemplative. She can be surrounded by empty canvases for months… and when she starts to paint it is a fight between her and the canvas. I would describe it as a ritual. 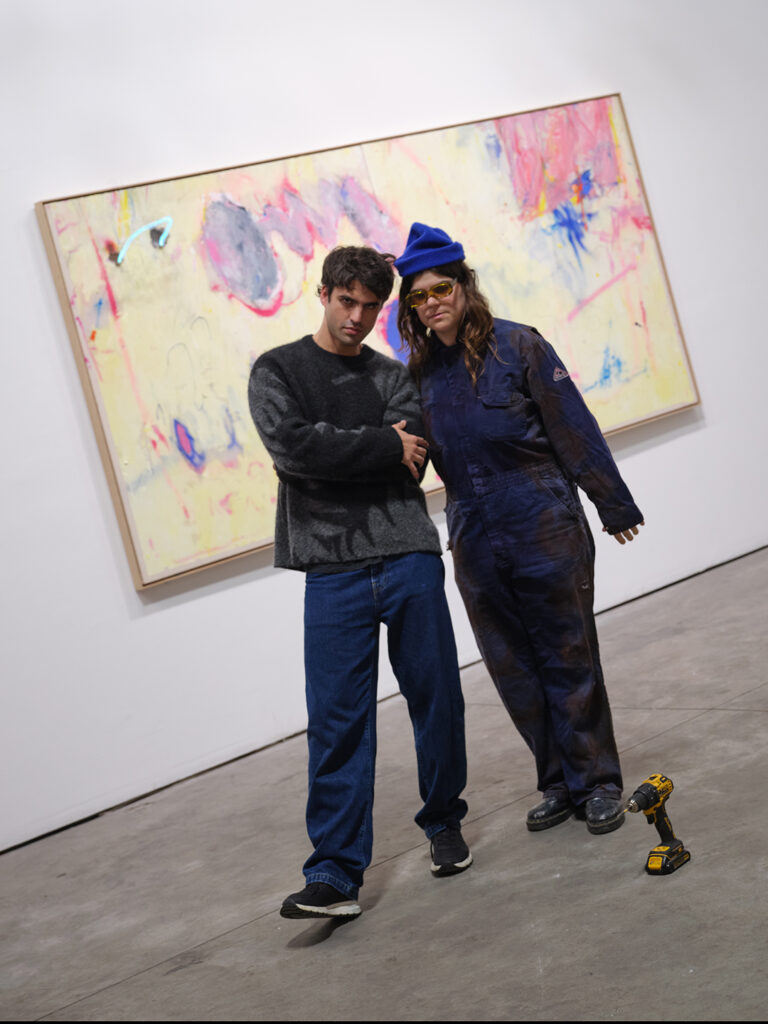