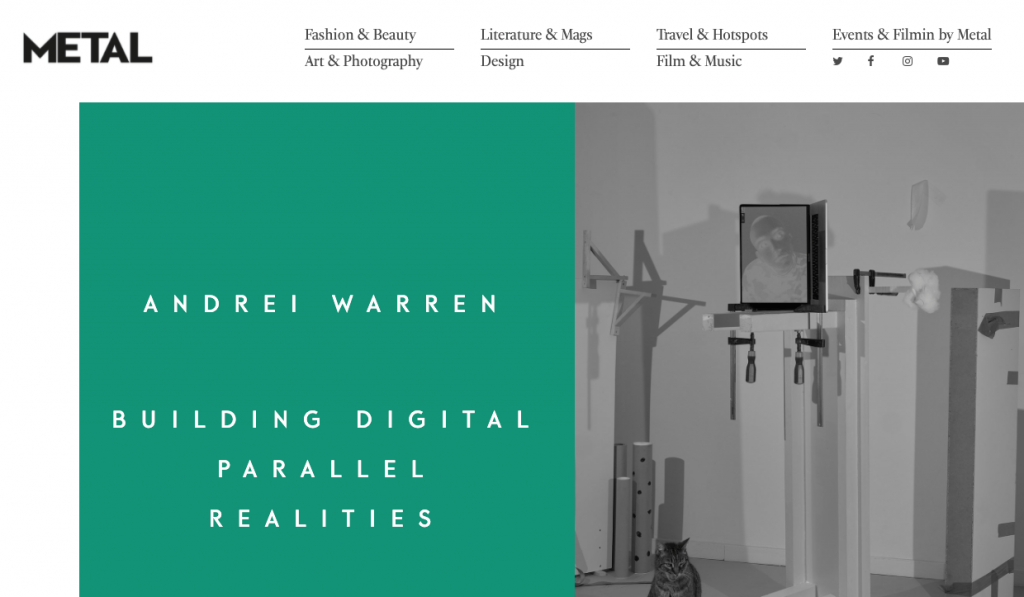 With an eye set on the future, Barcelona-based artist Andrei Warren imagines alternative realities, ‘what if’ scenarios, and parallel dimensions through his practice. Despite envisioning a dystopian future, he believes the new generations are here to amend the many mistakes made by our predecessors, and he’s fighting for a better world through his 3D and CGI works. With a list of clients including Nike, Marine Serre, Mugler, singer Octavian, or Garage Magazine, Warren has recently founded Misato Studio, where together with his team, makes your digital dreams come true. Today, we speak with him about this new endeavour, being self-taught, and his hopes for an ever-changing future.

You say movement and change are key themes in both your work and life. Why is that?
Life’s movement is what interests me the most, how we all go through the same stages but each one in their moment. How sometimes life can be as bright as the sun, and others it can be a dark void that we feel we can never escape from. These contrasts are what motivates me constantly.
Your digital art combines 3D techniques, proto-informatics and the future. How would you describe your work?
I would describe it as a hybrid approach that takes different techniques from contemporary art, where I want to show my vision for the future, specifically the close future and the things that are about to happen.

The digital world is evolving non-stop and at an increasingly fast pace. New technologies and softwares allow for new ways of creation. Since your work is strongly linked to these systems, how do you keep up to date with all the advancements?
I try to stay open and receptive to the new, but I also try to be more selective; there’s too much stuff out there. It’s a hard balance, to be honest. Stress and saturation sometimes get to you and I need a couple of days to reconnect with myself, the speed we’ve created is too much for human beings to take. On the other hand, I never lock myself in the old ways of doing things, I believe every new generation discovers a way to reinvent the mechanics and processes.

How important is being self-taught to you?
I don’t think being self-taught is the most important, but being proactive in the way we face problems is crucial – finding solutions by ourselves and expanding our minds instead of sitting and waiting for something to happen or just copying something or from someone.

Now based in Barcelona, you are originally from Serbia, but you spent most of your early years travelling around Europe and the United States. Do you think that living in different countries with different cultures has influenced your work?
Yeah, totally. Travelling with my parents and studying all over the world was a major change in my life, and it made me good at adapting easily and fast, as well as socializing and trying to have a friend or a group of friends in each city I set foot on. It also made me feel that I never had a classic ‘home,’ to which I developed a profound love-hate relationship, and now it’s a concept that I want to focus on in my work.

You first saw Blade Runner when you were 8 years old, and since then, you’ve been interested in alternative realities. How and why did you decide to transfer the world of fiction into the world of art?
To be honest, I was always super bored when I had to take a plane or a train, but I was also bored in class, so I started developing the skill to imagine parallel dimensions or answer the question ‘what if…?’ Since then, this question has always been there both in my artistic practice and my personal life. Lately, for example, I’ve been trying to confront nature and technology through imagining what will happen in the end, and how the end will be a new beginning.
What is your process like when you are creating a new art piece or working on a project?
I start with the main concept so I can establish a solid foundation, then I build up the aesthetics.
Exploring dystopian futures is a way of opening dialogues about our present. What do you want to discuss in your work?
As I said earlier, I’m very interested in the relationship between nature and technology and how it will develop. Will one of them reign over the other or will they coexist in balance?

You say that even though we live in a – every day more – technological world, we shouldn’t stop observing nature’s evolution. Do you think that nowadays people are becoming more aware of this?
I think my generation and the ones coming after us are here to solve all the mistakes humankind has made until now. We are much more conscious about respecting others and the environment we live in.
Let’s talk about your latest project, Misato Studio. After freelancing for some years, you’ve decided to launch your own studio. Congratulations! Your first projects include brands like Mugler, Marine Serre, Aristocrazy and A Better Feeling, as well as artists like Maria José Llergo or publications like Garage Magazine. Tell us more about the origins of the studio and your plans for the future.
The studio was there before I even realized it. For more than a year, I had been working with friends and colleagues on different projects, but in order to progress, move faster and more efficiently, we needed to step up, and that’s when it happened. That was just the beginning. With the studio on, we had to work harder than ever to establish it, but I’m happy it all turned out. Now I’m working alongside incredible people that I admire so much.
As per our plans for the future, we just finished a huge campaign for Mugler starring Bella Hadid, and we are now moving smoothly to bigger and bigger projects. It’s really important that we project ourselves as a team rather than a plain studio business, we count on each other for growing together and helping each other.

The studio’s Instagram profile reads that it’s a studio “based on kindness.” Why do you feel it’s important to highlight this?
Misato means kindness in Japanese. After some personal experiences these past years, I realized I was not being my best self and I was letting darkness take over, and what always saved me was kindness – mine and other people’s. Since then, I decided that I only want to work with people that can be kind to each other and treat the rest as equals. My team at the moment is composed by Laura Rigau, Carla Almeda, Diego Sanjuan, David M. Romero, Alex Nikolov and Alex Moli.
The global pandemic has pushed digital creation in new directions, and many companies and people are only realising now how important it is. Do you feel the new normality will help the development of Misato Studio?
It has definitely been a year of big changes for everybody, especially for mass media – they finally realized that 3D and digital content have no limitations.
We see you work with pioneering, avant-garde artists like FelipePantone, Candela Capitán or Kai Landre, who’s now a cyborg and is developing a cosmic sense. What keeps you motivated about the future?
I love working with these people because their visions are very inspiring to me, and they are also good friends of mine. What motivates me is seeing how far we can get as a civilization. The future is unknown, but today is inevitably a step towards that direction.

Seeing the state of the world right now, where do you find hope, motivation and interests to keep going?
I find hope in the people I love, in the people I deeply admire, and in all the unknown I have yet to learn.
Let’s get back to your projects. Earlier this year, you did a collaboration with Shoop, the unisex brand based between Madrid and Tokyo. I would love to know more about it, how did this project come about?
I’ve been friends with Yohei and Miriam for a long time now. Our creative visions are pretty similar and we wanted to do something cool that would work for both projects.
You have also worked with Nike, Octavian, or Primavera Sound. How did you find your personal voice while working with other artists or companies?
This is a tricky one… I’ve felt like I was losing my voice in some projects, but then you think about it and it’s obvious that you leave a part of yourself in every thing you do. When I feel like this, I stop for a minute and take a deep breath, then I find a way to introduce risky personal ideas into the work with clients. I think that, at the end of the day, that’s what they are looking for when they choose to work with me.

You say that wondering how the next reality will look like is one of your obsessions. What is your vision of the future?
My vision is quite dystopian. I think we will live in an increasingly separated world: on one side, all the machines and ‘techie’ people, and on the other, people that’ll learn to go backwards to respect nature more. Eventually, both will connect and think of machines that resemble or emulate the mechanisms of animals, plants, the weather, etc.
How is this ‘next reality’ according to you, and how do you try to achieve it through your work?
I think this will be an era of contrasts till each side meets the other, like the end of the Uroboros. I will keep working in finding logic and experimentation for developing new forms of art that will be deeply involved with the creation of the future.
And because we are talking about the future, what are your plans for the upcoming months? Also, where do you see yourself in, let’s say, five years from now?
My plans for the upcoming months are to travel as much as possible (when quarantine’s over) and invest time into achieving my personal goals. On the other hand, in five years, I see myself generating new narratives and new ways to understand them within different artistic disciplines.